Born in Leeds in 1855, Frank Kidson was a renaissance man way before the term was even coined, during his life time he was many things, journalist, author, painter, bibliophile, historian, lecturer, broadcaster, editor and musical antiquarian. In the last of those rolls, he was contemporary with Cecil Sharp and was also a founder member of The Folk Song Society back in 1898.

By the time of his death in 1926, Frank Kidson had already amassed over 400 entries in the music bible, Grove’s Directory Of Music & Musicians. During his lifetime he collected thousands of books and manuscripts, which upon his death were acquired by The Mitchell Library. He was also recognised with a blue plaque erected by the Leeds Civic Trust back in 2003.

“The Search For Five Finger Franks” follows a period of research from Pete Coe and Alice Jones and consists of a two cd, twenty seven song epic, that still barely registers the tip of the iceberg and leaves plenty of scope for return visits and sequels.

The songs have been lovingly recorded in the style of the first folk revival and that means they have a far jauntier feel than more modern interpretations. “The Songs Swim So Bonny” is an excellent example of this. A variation on “Two Sisters”  complete with murder, hanging, burning at the stake and a ghostly harp, the song nonetheless comes across as quite up tempo and jolly, rather than darkly interpreted.

That tempo, even if it gives the songs an older sound, makes the songs and tunes on this album a bit easier on the ear and helps bring you closer to the music. It’s very easy to imagine the songs being played in pubs and on village greens  as there is more of an opportunity to join in  with some gusto.

I found it very easy to do all 27 songs in a single sitting and similarly I’ve also found that both disks stand in their own right if you haven’t got a 110 minutes to put to one side. The listenability is aided by a good variety of textures and instrumentation, but primarily through the musicianship and singing of Peter Coe and Alice Jones.

As with all good folk albums, particularly those in the traditional idiom, there is a fair old body count, moral depravation and yes good honest songs about falling in love, some straight forward, others laded with hidden messages and innuendo.

If you are from Leeds and its environs , there is a good chunk of local history and reference tied in, but you can’t fault the universal nature of the selection. Peter and Alice have delivered an album that they can be rightly proud off and one that can be easily enjoyed. One of any serious collector of folk music undoubtedly, but also one for the casual follower of the acoustic spectrum. 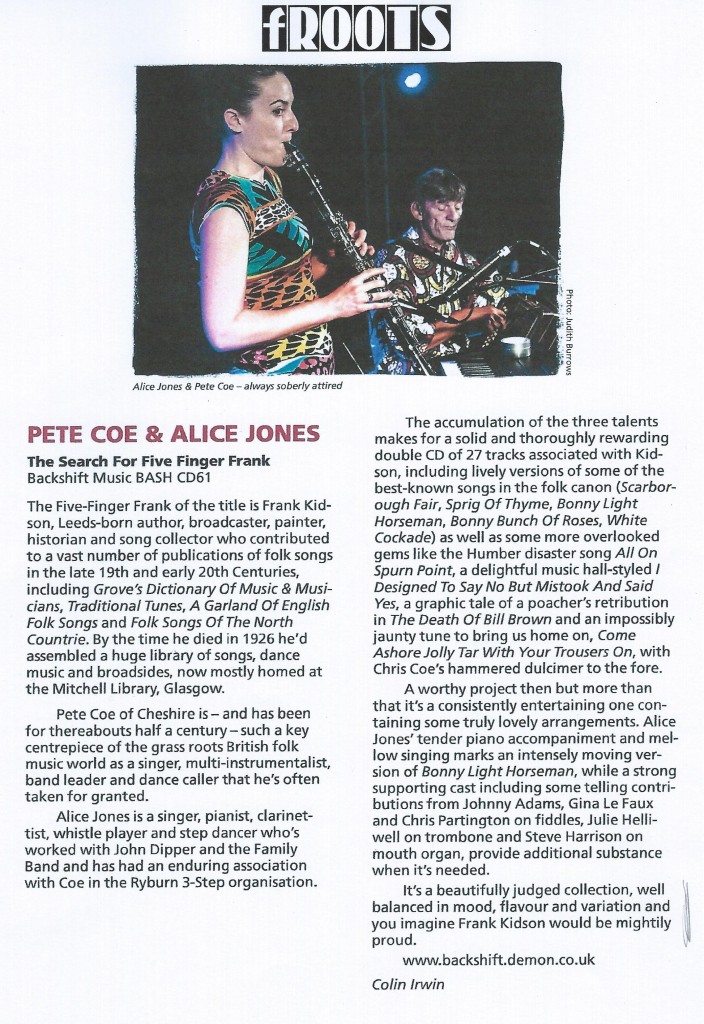 “Yorkshireman Pete Coe is a regular at Sidmouth, usually putting in several appearances during the week. Apart from being a very talented musician, he’s an interesting man with an encyclopaedic knowledge of British folk music. This year he was even busier than usual with ten performances and workshops, most of them in the company of fellow Tyke (and stunningly beautiful!) Alice Jones. In their concerts Alice played a harmonium. When I asked Pete why they were lugging such a heavy instrument on tour he told me that he’d come across a shipping container full of harmoniums made in China and bought the lot, so this may be a one-man attempt to resurrect the instrument. He’s been working on a project about folk song collector Frank Kidson. Most collectors of the period (Cecil Sharp, Vaughan Williams, Baring Gould for instance) were of a gentlemanly background, but Kidson was born the youngest of nine children in a family living in a small terraced house in Leeds. You can read all about him here – it’s worth reading. I’d never heard of him before, but it’s clear that he made a major contribution to the preservation of many traditional folk songs of the north of England. Pete and Alice have recorded a double cd of some of those songs and it’s surprising how many well-known classics are among them. It’s called ‘In Search of Five Finger Frank’. The name derives from the fact that when someone asked Kidson about his own musical ability he said he was limited to playing the piano with one hand and suggested that he ought to be called ‘Five Finger Frank’.

Strangely, when he died in 1926 no English institution was interested in acquiring his large collection of books and English folk songs and in 1930 his collection of 9000 books was bought by Glasgow library for £500. This includes his folk song collections which can still be viewed there, so English folk singers have to go into Scotland to check out their musical heritage.”

Review from English Dance and Song Magazine May 2014: 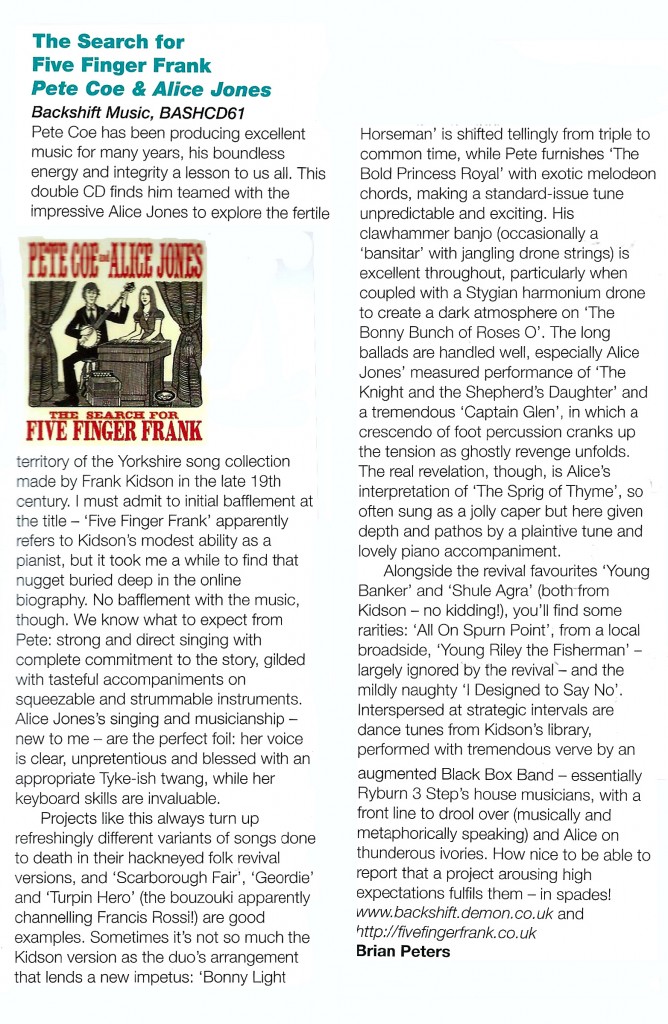 If you haven’t seen Pete Coe on stage recently (why not?) the title may require some explanation. “Frank” refers to Frank Kidson, something of a 19th century renaissance man from Leeds: publisher, artist, historian, antiquary and collector of folk songs and tunes. His first volume of songs was published in 1890, a full ten years before Cecil Sharp had even heard a folk song. Kidson was a founder member of The Folk Song Society but now he’s thought of as the “lost” collector with only one of his books remaining in print. As for “five finger”, that was how he described himself – he had many talents but pianist was not among them.

Having got the history lesson out of the way let’s get down to the business in hand. This splendid double CD set brings together twenty-seven Kidson songs and tunes. Alice Jones is every bit as much a multi-instrumentalist as Pete Coe, specialising in keyboards and reeds with a fine, natural voice that complements Pete’s unmannered style. The approach is essentially simple with minimal additions – there is a brass trio on two tracks, some fiddle, mouth organ and hammered dulcimer here and there – but the songs are what’s important.

Lest you think that this album is hard work, think again. These are often earthy songs and are treated as such – Pete even sets ‘Turpin Hero’ over the ‘Teenage Kicks’ chord progression and swears he hasn’t changed a word or a note of the melody. Many of the titles will be familiar and many others conceal familiar songs. ‘The Swan Swims So Bonny’, for example, is a nicely involved version of ‘The Two Sisters’. In contrast, disc 2 opens with a down-to-earth version of ‘Hares In The Old Plantation’ that’s half chorus. I hadn’t heard it before. ‘All On Spurn Point’, another new song to me, is the fascinating story of a shipwreck tainted by pecuniary considerations. Very modern. Kidson’s version of ‘Bonny Light Horseman’ is very different from the familiar one but this album is full of such delights.

“Now I can’t let you go without a heads up for The Search For Five Finger Frank by one of the great enduring, unsung treasures of the folk revival Pete Coe, in company with Alice Jones. It’s a double album of songs from the collections of Yorkshireman Frank Kidson – Scarborough Fair, One Summer’s Morning, Geordie and Sprig Of Thyme included – and it’s a delight.”

Live Review of The Search For Five Finger Frank CD Launch concert on the 13th April 2014 from Tyke’s News: 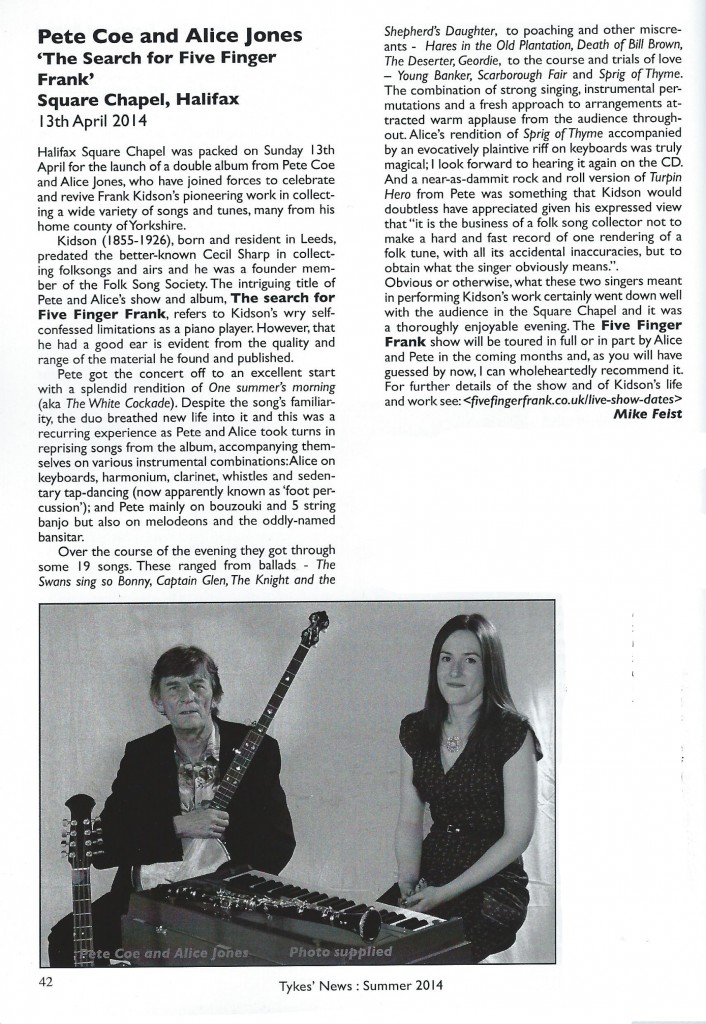